I've been working on converting old computers into digital photo frames. Several of my co-workers have dubbed the project, "Student Work Kiosk"

This is the oldest computer and the simpliest: 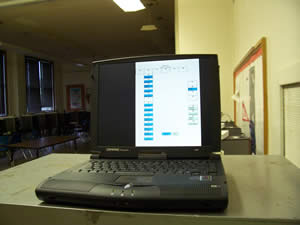 It's an old Compaq Preserio, runs Windows ME, and has no network card.  I do have a couple of USB devices I could use for networking, but why bother? Plugging this puppy in is against district rules.  The lowest row of keyboard keys no longer work.  The touchpad works fine, as does the display and the USB.  Personally, I think it serves a better purpose here than in a landfill, especially if it keeps me from buying a digital photo frame,

The plan:  I have it on a file cabinet facing the hall and will have it display things like my seating charts, my name, and other information students need coming into the room.   I am using TechSmith's SnagIt to make the various items and outputing them at the same resolution as the screen.  This computer will probably also display student work.

It is a simple process to pull the thumb drive, put it into another computer, upload the files and plug it back in, especially since it's near the door.

The next oldest computer: 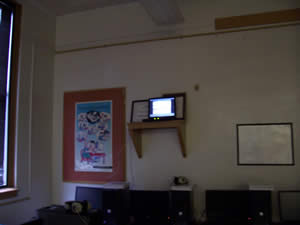 This is a district issued laptop -- given to us on the first distibution so it can be put on the school network.

It has Windows XP, everthing works on it, and it's extremely slow.  I've created a dummy student account for it, so I can add files to it as I go.

I've installed Tight VNC so I do not have to physically touch it to accomplish things with it.

I have installed VLC media player so that I can play movies on it.  When I am grading and I come across student work I like, I use TechSmith's Camtasia to record the program.  I place the file in my Video directory of the Student Account and it will be picked up automatically.  I also decided after I took these pictures that the display is too small but since I have an extra LCD display, I'll be putting that up there.

So this machine is truly a student work kiosk.  Again, I like this idea better than a digital photo frame, plus it displays vidoes and most don't.  I also like the idea better than filling up either a landfill or my closet.

I have also done the same tasks with my old teacher workstation. 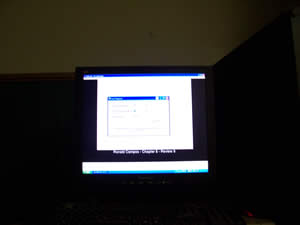 This is sitting on a file cabinet also.  Process and software identical to the laptop.

The final Student Work Kiosk is our testing server, only though we use it for a few days each year, they want it up and running most of the time.  Probably so we don't lose our IP address: 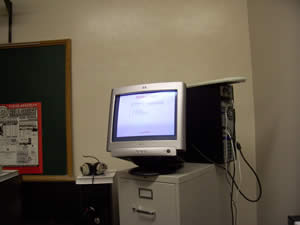 So links to the software used:

Tight VNC is at http://www.tightvnc.com/ and is free and open source.

VLC Media Player is at http://www.videolan.org/vlc/ and is free and open source.

SnagIt for screen shots and Camstasia for movies are both at http://www.techsmith.com, available with educational discounts.

It probably isn't more "green" then printing out student work, but computer programs, especially Windows applications, make no sense, printed out on paper.

It's also a good way to repurpose old equipment -- or in the case of the testing server -- making it do something purposeful when it has to be up and running anyway.

Making an image with SnagIt for the still image Kiosks is an absolute piece of cake.

Right now, I have duplicated all my "door" signs.  My class schedule, my tutoring hours, my seating charts, and my "no food or drink" signs are all scrolling through.

Best yet, if I have to make an emergency sign, maybe saying the Novell server is down, I can easier just move my normal signs to another directory and put the emergency sign up and it will display only that sign.

Making it flash would be easy too, because you could change the color of your background.

An additional idea is to work with your campus art teacher(s).  In fact, I was just approached by our art teacher to do some work with me on animations next year.

They are used to very high level graphics. Often when we talk about helping them to create games they get disappointed with what results they get. This leads to boredom and frustration and students leaving the program.

I'm a big proponent of getting them hooked with cool user interfaces and cool graphics.  It's why I love languages like Visual Basic and C#.  I know you can do Java that way but it is SUCH a pain in the rear and it is so easy with VB and C#.

Still REALLY wishing I was there!  Next year!

TAKS Testing sucks.  We have to shut down the whole building for the majority of the day.  This year, the state is finally letting us do it right, and letting the babies who are not testing sleep in.

Some of our babies can't stay home -- and after their behavior I wouldn't let them stay home either -- but that's another story.

So as teachers, we have a lot of different jobs to do this week.  Some of us are monitoring tests -- something as a diabetic I can't do well.  First, my medical equipment beeps and on really bad days, lets off sirens.  Second, the stress is hard on my blood sugar.  I always end up having a bad diabetes day.  Some of us relieve the monitors, and they were able to pair us up this time, so again, that's hard on me and the kids.

Other duties include supervising the students who aren't testing.  That wasn't a bad gig yesterday, we've got the 9th graders in the auditorium and either the 10th graders or 11th graders in the boys gym. They scheduled a large group of teachers for both gigs and we were able to alternate every hour.

Right now, I have my favorite duty -- hall monitor.  My job is to sit in one spot and make sure no student goes by me.  It also seems my job is to remember which administrator went through and which direction they went.  I'm not real good at that as they move around a lot.

We're only on day two but it seems to be going well.  And we were told that our security couldn't have been better during the last time of testing.

I found another laptop -- well, I knew I had it, just wasn't sure where.  It runs Windows ME <snicker>.  It also does not have a network card built it.  It's THAT old.

I'm thinking seriously of setting it up stand-alone.  I've got a shelf on the narrow end of the classroom.  The keyboard doesn't work, but who needs one?

I've got my camera in my bag so I'm hoping to get pictures tomorrow.

Another one of my "duh?!" moments.  Windows XP comes with the Photo Screen Saver too.

Again, I think I want the testing server to continue only handling Screen Shots.  Safer.

I've got the Slide Show running on my laptop now.  And I've downloaded VLC Media Player, it's documentation says it will play everything in one directory, so I'm hoping for that.

And yes, I've gotten VLC Media Player to download and to run my Camtasia videos, now I am trying to find out how to make the movies loop forever.

I am making progress.

I made a dummy student account in Novell and logged the test server to it -- that way I can save screen shots to the Novell server, and I don't have to get up and manipulate the test server.  I am pulling the images from that account.

I also made a Snag-It template so that the images fill the page, and have a heading of "Student Work" and a Footer with the student name.  Then I just paste the screen shots in.

It looks nice, and it is fairly easier to deal with -- however, I'd rather have movies of the program executing rather than screen shots, so I am still working on the Test server.

Though I've just decided that the Testing Server should just show screen shots, as at least part of the time it is a testing server.

I have a testing server that sits around my room doing nothing most of the time.   The only time we actually use it is during TELPAS or during other Online testing.  Physics EOC and World Geography in Math this year.

For several weeks before testing it has to be up and running, SO WHY NOT set it up to display student work.

Good news?  The OS on it (Windows 2000), I believe already comes with a Screen Saver that displays photos.

So this morning, I used SnagIt it to do some screen shots, and I have it showing on students work.

Right now, I'm moving the images manually but I think I'll set up a dummy student account and have it pull the pictures from the Novell server.

The Business Images and Multimedia instructor LOVES the idea and the first permutation.  I want to make the images fancier, but straight screen shots were a great first idea.

Well, duh, Vista comes WITH the capability of doing what I want, so that solves MOST of the home computers and even works with the sub folders.  Still need to work on the Gateway tablet since right now I'm running Windows 98.

I've downloaded and installed http://fourmilab.ch/slidescr/ to one of the house computers, it was on the list from the alfredtwo.  I don't like it for the house as it does not handle sub directories, and I have my photos arranged in subs.

I think it might be a good choice for school, and I could also download and tweak it to make it work better for the house but ....