Apparently the answer:  I've been there 16 years wasn't good enough.

Oddly enough I've worked in the Hillcrest area most of my Dallas career.  I started out at Park Central - working for GSI -- the original parent company of TI -- yes, my paychecks had TI logos.  I had a brief stint up in Plano, which I hated, a few days in Los Colinas which was worse, but nice to be able to come home for lunch.  Did some free lanch dog training and grooming and then to Hillcrest.

There are lots of things I'd like to change.  First, I wish the janitors would get things repaired.  Right now the elevator almost works and I've been trapped in it three times since the beginning of the year.  I don't mind it much but I don't want our wheelchair bound babies trapped there.

I wish we could get modern HVAC.  Right now, we have two temperatures, really hot or really cold.  Nothing in between.

I wish my room was squarer.  Wish I had a better desk.  Well, I could have that, but i have to buy it and those things tend to disappear.

Sometimes I wish that our doors were not revolving doors for adminsitrators, but then again, we might have to put up with somone who wasn't good.  Right now, we make them good and send them on to bigger and better things.

However, I love the neighborhood kids, and I really like most of their parents.  The rest could benefit from some parenting classes -- especially the ones who believe their kids over me. Especially when the kid has a history of lying.  Oh, that IS why the kid lies.

I plan on staying on at Hillcrest until I retire.  The drive is good, I get to do what I want most of the time, though the Campus Technology gig is a pain.

Because of twitter I am at a unique staff development, may have found a teacher for one of our openings and am recharging a bit.

During winter break, I saw a tweet about Lego Woman's build. it was not what I thought but was good.

I wanted to see visual studio drive the legos robot but that was not to be.

but I did see how to use traditional legos to get people to think about tough questions. 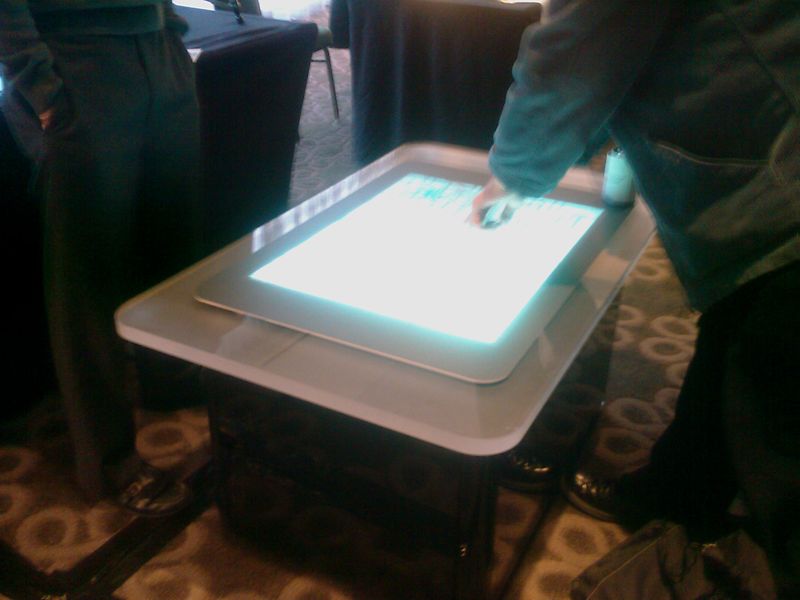 Last on the Uverse Install

I called and checked to make sure that all the i's were dotted and t's crossed on the install. By the way the ADT alarm system still works -- every important and 911 service is supposed to work too, but haven't tested it.  Not planning on that either....

It's actually going to save us $50.00 month so I am quite excited and I love being able to manage the voice mail system on line.  I'm going to have try to get my wireless voice mail working right too.

Love Uverse.  Not wild about their installers, but I've never had good installers when it comes to telecom/cable.

More on the Uverse Voice Install

Everything is working -- almost.

Last night after the technician left, I decided to try to call the house and got the old copper message and no phones ran.  Whoops!

Call Uverse tech support and they said wait until midnight.

So tried at 7:00 am, Whoops! Phones weren't ringing.  We were definately on Uverse Voice VOiP because I could call from the internet (good test, folks!).  So called Uverse.  Some child named Sam answered and keep asking me questions while I was trying to answer the one he just asked.  Or she.  Was quite annoying so I just did what I do when my students interrupt (or parents), just shut up, wait for them, and then quietly ask them to be quiet until I finish talking.  Oh, works on my mom too.

Finally got a Tier 2 support who ironed out the problem and everything works fine except linking my wireless voice mail.

Right now, when people call my wireless voice mail they can't leave me a message.

Called Uverse Tech support after not finding the answer immediately and got a child who either couldn't speak English or was not capable of hearing what they were told.  So they couldn't find the answer in the book but in the meantime, I fought out how to delete the link on the web site.

Plus the uptime is fabulous.  So is the DVR, and the price.

Bernie Madoff and the Need For Ethics in Computer Science

Bernie Madoff and the Need For Ethics in Computer Science

Computer fraud and theft is, unfortunately, not just the stuff of fiction and the movies – its real. The line from Spiderman is “with great power comes great responsibility” and computer knowledge fits that completely today.

I'm not sure it works.  But it does make me feel better.

More on One Note saving my sanity

This morning I had a sheet of paper in my hand that needed to go into my Campus Technology notes and I thought -- I bet I can scan this directly into One Note!  Sure enough, click on Insert, Pictures, From Scanner or Camera and it was done.  Inserted right into the page I was looking at. 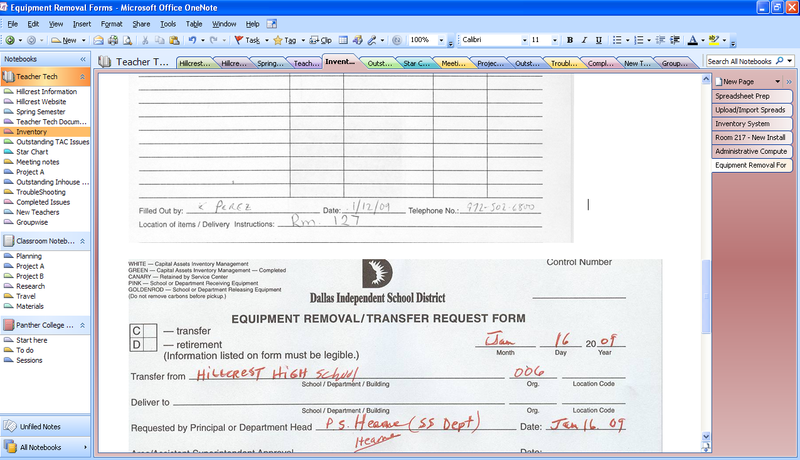 As you can see here, this is my Inventory section.  I have been scanning in each of my equipment removal forms.  I also have each of the emails I've received on the inventory system with directions on how to use it.

I'm also leaving myself notes on the things as I go -- I have a document from the install in my room, one from when they scanned the Administrative Computers, etc.

Everything in one nice neat place that I can do a search on.

Today was fun.  Had a Uverse Voice install scheduled for noon - 2:00 pm.  Didn't want to start anything that I didn't want interrupted, but no worry, didn't hear anything.  Called Uverse service at 2:00 pm, said it would be about an hour.

Called at 3:45, couldn't find the installer.

Finally called at 7:00 to reschedule, oh, he cleared the last call and is on the way.  I was sure he wasn't but waited.  Finally showed about 7:30, was here about an hour.

The good news is that the alarm system still works.  I am wondering here he but the backup battery, as I don't see it in the house.  Of course, Rich and I have cell phones, so I'm not worried about that.  Plus I have ham radio.

Right now, you can't call us.  The number is still on copper.  That's a bit worrying but hardly anyone calls at night that doesn't immediately try the cell phone, so not real worried.

It is supposed to save us $40 a month, which will be nice.

As a whole, I really DO like Uverse.  Our first install went okay, though the tech let a dog out -- didn't latch the gate -- and she had to spend the night in doggy jail.  Learned.  Dogs stay locked up when other people are in the house and we double check the gate when they are gone.

It saved us enough to afford a maid when we switched to it.  Hated the old internet service and thought the cable and DVR was okay.  Loved the internet service when it was local until they sold themselves.

So I don't mind too much putting up with today, but wish the phones would ring.

Microsoft One Note is Saving My Sanity

Sort of related to my last post about being driving nuts.

The problem with the Campus Technology job is the sheer volume of information you have to deal with.  When you go to new teacher training they give you a notebook full of stuff.  Then you go to regular training and get more stuff. You also get stuff in email and stuff in the school mail, etc.

I have finally figured out how to organize it and it takes a scanner and One Note.

I had to go through and scan everything - next year I am going to insist they put this stuff on a website, though they probably won't listen. 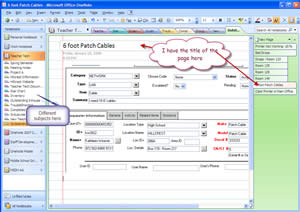 When someone gives me a Tech support request via email, I print it to One Note, open in a new page.  If I need to put in a ticket, then I put it in, screen copy the page, and paste it in there.

If they give me one on paper, I scan it in, create a new page and go on as above.

Any changes on the status, I just update it.

I can even group related requests: 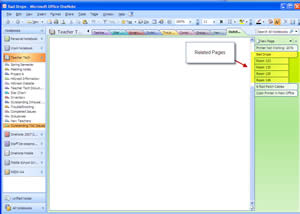 Group related things makes the next tickets easier, as I can copy the information from the old tickets.

It is really making life easier!

I sent the following email out to the teachers in my building:

I am now taking requests for Technology Assistance.  I have attached a word document of the form you need for assistance.  Save it, fill it out and email it back.  Keep a copy for your records.  Also, if you need help later, you can just change the form.

If you need assistance you MUST fill out the form -- completely -- I have to have all the numbers.

I work off of an email list. That helps me keep track of what needs to done.  If you tell me in passing I will forget.  If you do see me in the hall, I'm on my way to help someone else and my mind is on that task.

If your email is not working, then come see me in my room and we'll get it taken care of.

So now they approach me with "I know you said in your email BUT" ....

<sigh> At least they are reading their email.

Love the new computers.  One idiot child said he didn't like them because they were black.  Told him, next time we'd consult a designer, first.

Having problems with 2nd period child.  Stepped out, he pulled Bluetooth donger and USB cables that I had JUST put in the computer.  Wrote referall, he's been tampering with computers on reglar basis.  Will start checking at end of period and send him to ISS directly if he does it again.

Have to do some tweaking on the Java.

Here's the fun part, we can't give each others ACPs (Assessment of Course Performance, ACPs).  So I have to give the French teachers.  I left him color coded seating charts, already done, just fill in the test form.  I'm going to have to fill out HIS seating charts, but at least he left me names.  <sigh>

Finally figured out how to deal with paper.  New scanner files by month, so I am going to scan in every sheet of paper I get then, hopefully save it again in the right place, then toss.  Hate paper.  I always lose it.