Having the right contact in, really helps -- and is a bit of a pun, since it is the right that is giving me such problems.

Now I need to either get my brain to reset -- which is why we're waiting until Wednesday to try any changes, or get a different contact for the left.

I've got a bit of fuzz on that side.

I literally haven't been able to see for weeks.  I was upset but thought it was my blood sugar control -- however, the weird part my eyesight was bad, even when my control was good.

I decided to go ahead and see my eyedoctor this weekend, rather than waiting until after labor day and I am really glad I did.  I've "lost" a whole unit of astimigatism and it was as if I was "wearing someone else's contacts".

However, then the doctor added that she'd only see that in patients who were developing cataracts.  However, she didn't see any problems with the retinal mapping machine.

So I've got the new prescription in, and it's amazing how much better it is to be able to see!  I really want to go  back to correcting both eyes though, if we can.  I just feel better though having the right eye corrected properly makes a huge difference.

First, let me say that it's a shame that Animas has to produce a lens film for the pump.  I know first hand there is a problem with the materials that the pump is made of, I managed to completely ruin one by rubbing it in my pocket -- I had it for a week.

I also think it should be free.

However, I got my lens film yesterday, and it comes in a kit, with three films.  We'll see how long they last.  Immediately pulled the cheap stuff I had on it, cleaned the pump and applied it.

The skins are nice too, and having the added protection is nice.  They are a rubberized material, I got one in black, red and blue so I can change colors.  My Ping is black.  They are a tad expensive, but there is a limited customer supply.

The week from hell

As I predicted, this was a bad week.

We reported on Monday, and everyone proceeded to abuse me because they all got new computers.  Most just could not cope with this at all.

Plus the people who wired our portables, almost finished the job and the wireless network was a bit flaky.

When I left Friday, people were calmer but not by much.

I also left without having my things done, but I am getting most of them done here at the dog show in Fort Worth.  I got a good start in this morning, spent the afternoon cleaning up my email, and will finish tomorrow.

I did get to see Paul McCartney and I think I even got a blog post in about it.

Tuesday was the worst day, I had not brought my own food and drink and the hotel was just hideous.  Now I understand that I'm not easy, I don't like water, tea, or coffee and can't drink carbonated beverages.  I should have at least brought my Crystal Light Powder.  Lunch was even worse, soup, icebert lettace salad and dry sandwiches.  If there were any kind of condiments, I never found them.

Principal didn't want me using my netbook and we had a bit of a fit over that.  Excuse me, but I do take notes.

I'm learning though -- take my own food and drink.  Free food isn't free!

Cowboys Stadium isn't bad. Seats are a good size unlike American Airlines and the acoustics are okay.

Thanks to Brian i have a good parking space and a ride as close as possible. Getting to a spot where they can find me to pick up will be good too.

I was 105 when i got to my seat so the candy i picked up at Walgreens was a good idea.

The opening act is The Script and they were actually quit good. They are from Dublin Ireland. 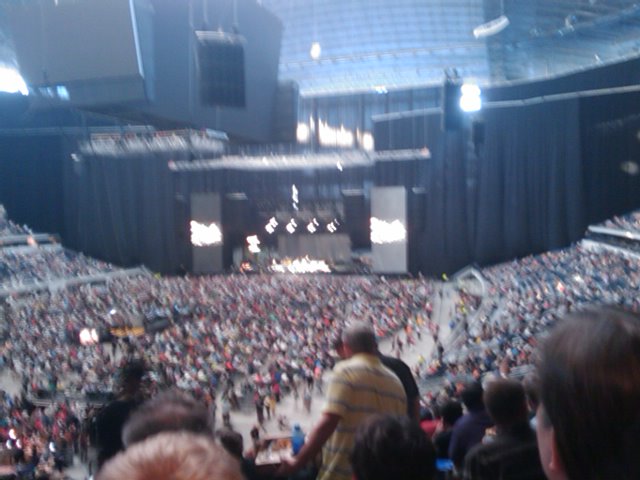 Sir Paul McCartney was definately good.  He is 67 and he looks hot.  Excellent job on the hair (they don't match the color of his eyebrows), and his age was showing when he got tired.

He switched instruments about every other song, sometimes more often, and played piano and several different types of gitars and other stringed instruments.  He was spot on and quite funny between sets.  Even did a few solos.

The musicians accompanying him were quite good.

It was quite a walk out of the stadium to the street where I could be picked up and lucked out again.  The place we decided to meet was a pizza place, and there were about 6 Arlington cops hanging out there waiting until the concert let out and they were needed for traffic duty again.  It was amusing to hear them talk, just like the old Police K9 days.

All in all a good night, well planned and executed.

It's really no fun being Campus Technologist because you can't have a moment off, you can't go to the teacher's lounge, or anywhere else without that hat on.  Heck, I was supposed to be doing summer camp last two weeks and spent most of my day dealing with technology stuff.

Don't get me wrong -- I spent the four hours with the kids, but spent another four hours dealing with stuff while off the clock.

At least I don't have to deal with those issues now and most of them are completed.

Agility practice was good.  Macy still doesn't understand delayed gratification and her early runs were all about looking for the cookies in the grass.  Part of that had to do with me getting their late, having to go to the restroom, etc.

Later runs got better though.

Also she didn't hestitate at the teeter at all.  I'm vowing not to call it a teeter next show.

Maggie was good too.  I screwed up the course first run, Elizabeth called me on it, and Maggie wandered off and didn't want to come back.  The rest of our runs were great, especially the last one when I found myself head of her at the dogwalk and was able to do a blind cross.  She didn't like that the first time, bellowed and went around me, even though my hand was out.

Second time though, she did get it right, without complaining.

She hadn't see that before but once she saw it worked, she was cool with it.

Two more days of teacher stuff and unfortunately it's over in far East Garland.  Putting lots of miles on the car this week, four drives to Ft. Woth, one to McKinney, two to Garland, one to Plano, and one to Arlington.  <sigh>

Our classes came too close together to blog.

Macy ran first in Jumpers and she make one mistake too many (she was 7 points from qualifying).  It' probably me, but she ran around three jumps.

Maggie ran standard next, and I think she had two refusals and that is one too many.  She refused a tunnel and I am sure the judge called a refusal on the weaves.  Everything else was good and spectators said she looked happy.

However, her jumpers run was a disaster, I think it was the camera in the ring, as she really was slow coming off the start line and she was headed towards a photographer with a huge lens.   She finally stopped in front of the weaves, again, facing the lens. I had to pick her up and take her off the course.

Macy tried really hard and got everything right until we got to the teeter, and she just couldn't do it, but she did put two feet on it.

I really think all 8 classes were too much for us, and we probably should have left after Maggie's standard run but you never know.

We all home, chilling in the cool house.

So I survived my first day of my "week from hell".   Even made it by Office Depot for teacher appreciation day.  We have one close to the house, really like the manager and it means a lot of him if I come by.

From a diabetes standpoint, I did really well.  At one point, long before we ran I was at 191, but then remembered that I usually ran agility at 50% higher than my normal weekend rate, so did that.

Rest of the day had nice low blood sugars but also did protein most of the day -- though I'll admit to a McD Mocha for the caffeine intact on the way in.  I'm officially addicted, but it's better for me than diet coke.

Did well on food, I had one of my days where carbs made me think about throwing up, so had a bratwurst and egg for breakfast, corndog from the vendor for lunch, some KFC dark meat grilled chicken on my way home.  Finally had my Diet Gourmet lunch for dinner. Doing on the total daily dose of insulin.

On the clothing front, I wore the exact same clothing -- top and skirt -- that I did a year ago.  However, a year ago they were too small, and now they are approaching too big.

Neither of the beagles showed sign of stress -- they were running with me, and trying hard.  Most of our problems had to do with handler confidence and some minor training issues -- Macy is still scared of the teeter -- and I think that will start going away after today.

I've very happy I entered and I am looking forward to the next three days of trials (tomorrow and next weekend).  I am even thinking about seeing if I can move Maggie to Excellent with this trial.

We had a nice run – she missed the tire when I first sent her, but she came back and got it.  She did the chute!  And she had trouble with the dog walk but I think she thought it was the teeter – I swear she needs beagle glasses.  She did everything else until we got to the teeter, it was the second to last obstacle and she was silly and just wouldn’t do it.  She has been afraid of chutes and teeters since we started competing but I think it will come.

Looking forward to a good day tomorrow, I’m getting my confidence back.

Started out good until we got to the tunnel  -- she sent to it but decided I didn’t mean it and came back out.  Nice weaves, but I wasn’t in a good spot to direct her and kind of got lost.  I stopped her, gathered us both together and had a really nice ending.